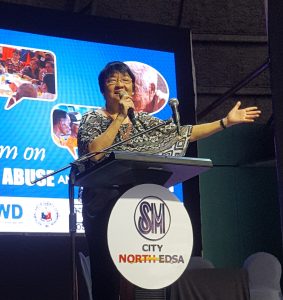 An estimated 600 older persons from the local government units in the National Capital Region and senior citizens’ associations like the Confederation of Older Persons’ Association of the Philippines (COPAP), Coalition of Services for the Elderly (COSE), and Federation of Senior Citizens Associations in the Philippines (FSCAP) participated in the culminating activity of Elderly Filipino Week held on October 7 at SM North Skydome  in Quezon City.

With the theme, “Pagmamahal at Respeto ng Nakababata, Nagpapaligaya sa Nakatatanda”, the week-long celebration featured a host of activities starting with the Walk for Life held at SM Mall of Asia on  October 1 and ending with a Talakayan Forum on Elder Abuse and SSS Pension, launching of National Respect for Centenarians Day, presentation of the results from the research done by Dra. Clarita Carlos for SM Cares on the subject:  “Population Ageing in the Philippines, Issues and Challenges”, and Ms. FSCAP Coronation Night.

In her opening message, Sec. Taguiwalo stated, “It’s such a privilege to grow old, and hangad ko ang ating patuloy na kalusugan at kasiglahan (I hope for our  continued good health and well-being).”

Sec. Taguiwalo, likewise, assured that the DSWD will expand the programs and services for older persons, such as Social Pension for Indigent Senior Citizens, and support for legislative measures like the proposed bill on against elderly abuse and increase in SSS pension.