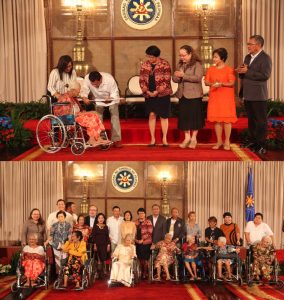 President Rodrigo R. Duterte bestows a Letter of Felicitation and a Centenarian gift worth P100,000 to eldest Filipino centenarian Lourdes Marquez during the ceremonial signing of the Implementing Rules and Regulations (IRR) of Republic Act (RA) 10868 or the Centenarians Act of 2016 yesterday, September 26, at the Malacañang Palace.

Earlier,  the three department secretaries, together with Commission on Filipino Overseas (CFO) Officer-in-Charge (OIC) Maria Regina Angela G. Galias (not in photo), signed the IRR of the Centenarians Act  to ensure that all Filipino centenarians will receive proper commendation for their contributions to nation-building.

The event concluded with a photo opportunity with Pres. Duterte, his cabinet secretaries and other centenarians with their relatives and caretakers to celebrate the momentous event. #