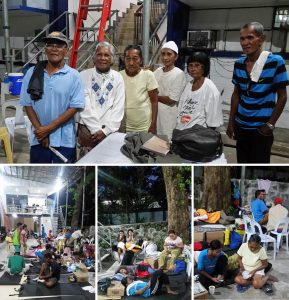 The seniors and other urban poor residents of a barangay in Tandang Sora who were arrested on Monday due to housing issues are now in Camp Karingal.

The senior citizens are now on their third day under detention in Camp Karingal. They are all members of the urban poor community group Kadamay.

Sec. Taguiwalo clarified that the DSWD has no mandate to involve itself in housing rights issues, but it is mandated to look after the welfare of senior citizens. DSWD social workers and staff have spoken at length to the eight senior citizens and determined that the conditions in the detention area where they are currently being kept under guard with their neighbors who were also arrested are bad for their health. Criminal charges have been filed against the arrested urban poor residents. Charges include grave coercion, and forms of trespassing. The seniors are aged 64 to 83.

“We appeal to the local government officials of Quezon City and the court authorities who are now handling the case of the senior citizens and their neighbors to release the eight seniors. While we will not comment on the circumstances of their arrest and the nature of the housing rights dispute which resulted to their arrest, we will, however, appeal for the immediate release of the seniors because their health and therefore their very lives are threatened by their incarceration,” she said.

The following are the seniors currently in detention in Camp Karingal:

“We saw that everyone has been sleeping on the cold pavement, with only thin wooden planks and plywood separating them from the floor. With the intervention of Anakpawis Rep. Ariel Casilao, the PNP lent their own rubber mats to the arrested citizens, but these are not enough to keep out the cold because there are no blankets for the detainees. The senior citizens are particularly vulnerable because most of them have pre-existing health conditions like hypertension, asthma, weak lungs, and other diseases connected to old age,” said Sec. Taguiwalo.

The DSWD Field Office and Central Office today turned over plastic sleeping mats, blankets, and clothes donated by DSWD employees and their families and clothes from the DSWD Crisis Intervention Unit (CIU).

“The senior citizens are all in need of various maintenance medications. When they were arrested, they had no time to take clothes or their medications. Some of them have begun to suffer the effects of skipping their medicine,” she said. #