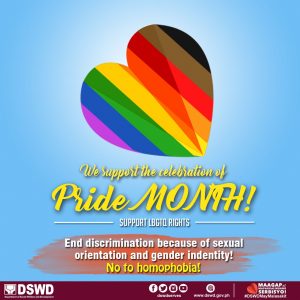 June is considered to be  Pride Month, and the Department of Social Welfare and Development (DSWD) is one with the Lesbian, Gay, Bisexual, Transgender and Queer (LGBTQ) community to eliminate discrimination based on sexual orientation and gender identity.

“Being true to one’s self is one of the many commendable things that we can learn from the LGBTQ community. The members of the LGBT sector are brave and never afraid to assert their rights, celebrate their individuality, and express their compassion to others despite the many types of discrimination that they experience every day,” said DSWD Secretary Judy M. Taguiwalo.

In line with this month’s celebration of the Pride Month, the Department reiterates its full support to the passage of House Bill 4982 or the “Anti-Discrimination Bill on the Basis of Sexual Orientation or Gender Identity or Expression (SOGIE)” or the “SOGIE Equality Bill” which seeks to penalize “unlawful discriminatory practices against any person on the basis of SOGIE.”

Sec. Taguiwalo said that the passage of the bill will be a significant development to fight and bring down the number of hate crimes in the country based on sexual orientation or gender identity. She also said that the bill can help establish a safe environment where the LGBTQ sector can be empowered and its members can freely express their individuality without being judged or discriminated against by others.

“We envision a future where being a member of the LGBTQ community is no longer an issue of controversy; where LGBTQ people can demand and then freely access the services of the government  without the fear of humiliation and their rights disregarded. This is also the reason why we want to include a provision to review and strengthen government social welfare and social protection programs for the LGBTQ community and to improve their provision of health insurance with regards to their physical transformation for their chosen gender identity,” said Sec. Taguiwalo.

“The LGBTQ community continues to soar despite the many forms of cruelty that they are often subjected to the more backward and conservative sectors of society. We hope that the more informed and compassionate members of the public will continue to support them and their calls for gender equality because LGBTQ rights are human rights and should be respected,” the social welfare chief  added.

It can be recalled that the DSWD has also released a policy last year that fosters gender-inclusive workplace, stressing that DSWD personnel belonging to the LGBTQ community have the right to comply with the office uniform styles prescribed by the Department in a manner consistent with their gender identity and expression. Preferred uniform styles of personnel belonging to the LGBTQ community will be respected i.e., either they opt to wear pants (in lieu of skirt) or skirt (in lieu of pants).

Sec. Taguiwalo further said that the DSWD as an institution respects and upholds LGBTQ rights and hopes that all its employees and personnel would do the same. She said that recognizing the right of its LGBTQ employees and staff to dress based on their own preferences that are tied to their gender identification is the least that the DSWD can do.

“We still have a very long way to go before the rights of LGBTQ become fully accepted in Philippine society, and every little effort to promote them is important and should be enforced,” she concluded. ###